It is a rare cold night in November. A shining crescent moon looms behind the red neon sign of the Versailles restaurant in Little Havana. Inside, almost all the tables are full. The cacophony of conversation filled the air.

Alexandra Valls is seated in a quiet space between the main dining room and the bakery of the restaurant that her family owns. The floors are green and white checkerboard, a pattern that is reflected in the wicker seats.

Behind her are old black and white photographs of all kinds of happy faces of clients and staff at Versailles. In one photo, a mustached gentleman smiles as he rests an arm on the back of his date chair as she firmly holds her fork in what appears to be a plate full of vaca frita.

The collection of images is part of an archival project that Valls, 33, started earlier this year.

She laughs as she recounts how her father, Felipe Valls, has asked her for years to create an archive of stories and images of the famous restaurant. The 50th anniversary has turned out to be an opportune moment.

Valls has worked closely with HistoryMiami, the Cuban Heritage Collection at the University of Miami and the Miami Herald to discover the gems of the past. Part of her effort was to issue a community call to action to ask people to share their stories and images.

“I wanted to create this kind of public archive to make the voice of the Cuban people heard more because we need more of them,” she said. “[With this project,] we are essentially giving these Cuban exiles a platform to express their own stories and their own experiences of exile. ”

In addition to the photos organized by Valls, the theater collective led by director and playwright Victoria Collado and Vanessa Garcia, Abre Camino Collective, will hang portraits of its Viva Cuba Libre project near the Versailles bakery. Both exhibitions will be in place until the end of the year.

A Versailles employee walks through the space and suddenly notices the new photos hanging on the wall. She stops to take a closer look. Her face lights up and lights up as she walks from frame to frame. 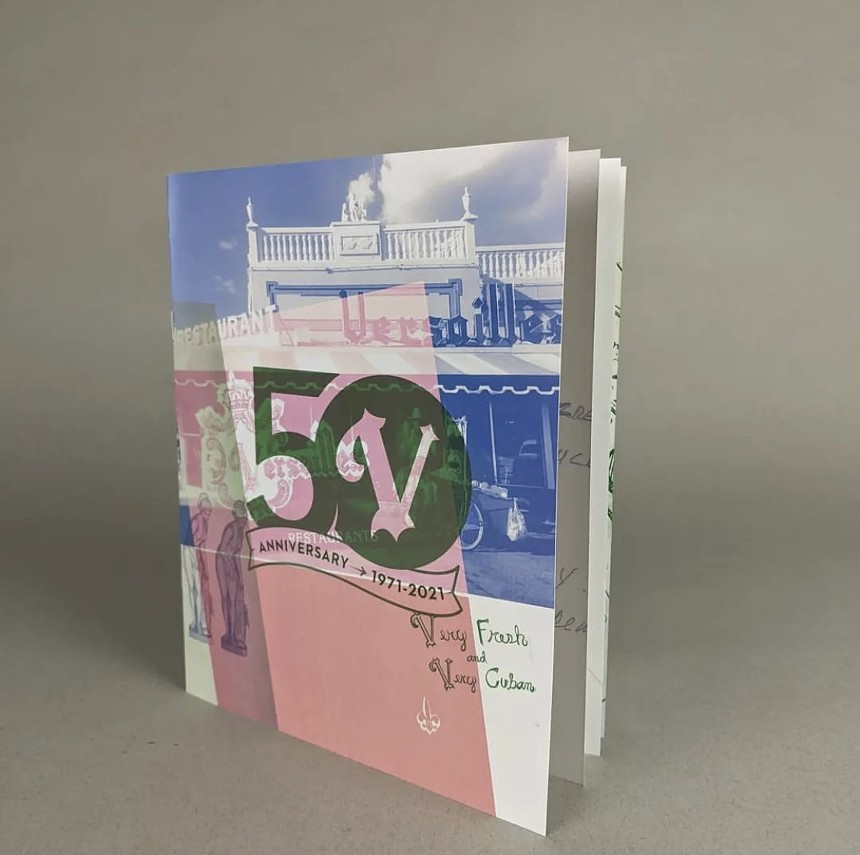 The fanzine of the 50th anniversary of Versailles, produced by Exile Books.

Although the restaurant is a family business on the operations side, it is evident that the sense of camaraderie extends to every member of the staff, as well as to the customers.

“It’s the people who make the place,” Valls said, nodding to a passerby. “It’s always special when people feel connected to my family – it’s nice to hear their stories.”

Valls herself has countless memories of her childhood at the restaurant. Her mother would drop her off after school and she would jump all over the place in her uniform. The staff cut their empanizado bistec into small squares. She knows the ins and outs of Calle Ocho restaurant better than any other place in the world.

“We’re celebrating our 50th birthday and I’m 33, so all I’ve known is Versailles,” she says.

She wrote a brief preface about her experiences for a zine she produced with Exile Books – another project to commemorate the family restaurant’s big anniversary. Valls worked with writers and locals to share their stories about Versailles for the zine, which will be available for purchase during Miami Art Week at NADA Art Fair from December 1-4.

Although Valls is a working artist herself, she also leads the curatorial collective known as Good to Know.FYI (GTK.FYI) along with other artists and curators Juliana Steiner, Julianna Vezzetti and Jess Hodin Levy .

After earning degrees in Marketing, Communications, and Sociology from Emerson College in Boston, Valls worked in advertising. She dabbled in screenwriting in Los Angeles and even did a brief stint at New York Culinary School. But after taking art classes in New York, she found her true passion.

“And then I started organizing without even knowing what I was getting myself into,” she says.

She meticulously separates a Cuban puff pastry, telling how GTK.FYI was born.

Photo courtesy of Good to Know.FYI

In 2017, Valls’ father Felipe acquired land adjacent to the restaurant. It was a former shopping center, one half with active tenants, the other empty in appalling conditions.

“My father wanted me to do a mural,” says Valls. “When I walked in and saw the space, I saw this amazing empty building. I knew then that I didn’t want to paint a mural; I wanted to do a full show there.”

In less than three weeks, Valls staged a full-scale exhibition featuring artists from around the world, and Good to Know.FYI was born.

GTK.FYI hosts a show each year during Miami Art Week, as well as large-scale exhibitions and site-specific works throughout the year in New York and Miami.

“Pleasuretown is one of the funniest shows to put on,” says Valls. “It’s about Miami as a sort of Sin City, a party town – shamelessly looking at all of these vices that people associate with Miami and this nightlife as a place where people come to relax.”