Affordable small sedans are very popular in South American countries, so Volkswagen put a lot of effort into developing a replacement for the outgoing Gol. The VW Polo Track is a new version of the subcompact model that will be produced in Brazil with basic equipment keeping its price as low as possible.

VW recently unveiled a facelifted Polo for South America, but the Polo Track is a different model, despite sharing the MQB-A0 underpinnings and most of its exterior and interior design.

Read: Hyundai HB20 Facelift debuts in Brazil with i20 styling

The Polo Track can be distinguished from the standard Polo by the unique grille pattern, the omission of the LED strip, the halogen headlights and the various bumper inlets without body-colored elements. The profile is identical except for the 15-inch matte black hubcaps. The color palette includes four shades: Crystal White Solid, Ninja Black, Sirius Silver Metallic and Platinum Gray Metallic.

Changes to the rear are limited to the light colored taillight housing, ‘Track’ lettering below the VW emblem and new bumper with a larger black painted section and adventurous looking skid plate instead of the fake exhaust pipes of the regular Polo. Overall, VW’s designers have done a great job hiding the budget character of the Polo Track, making it look quite modern despite the many similarities to the pre-facelift sixth-generation Polo, originally introduced in 2017. 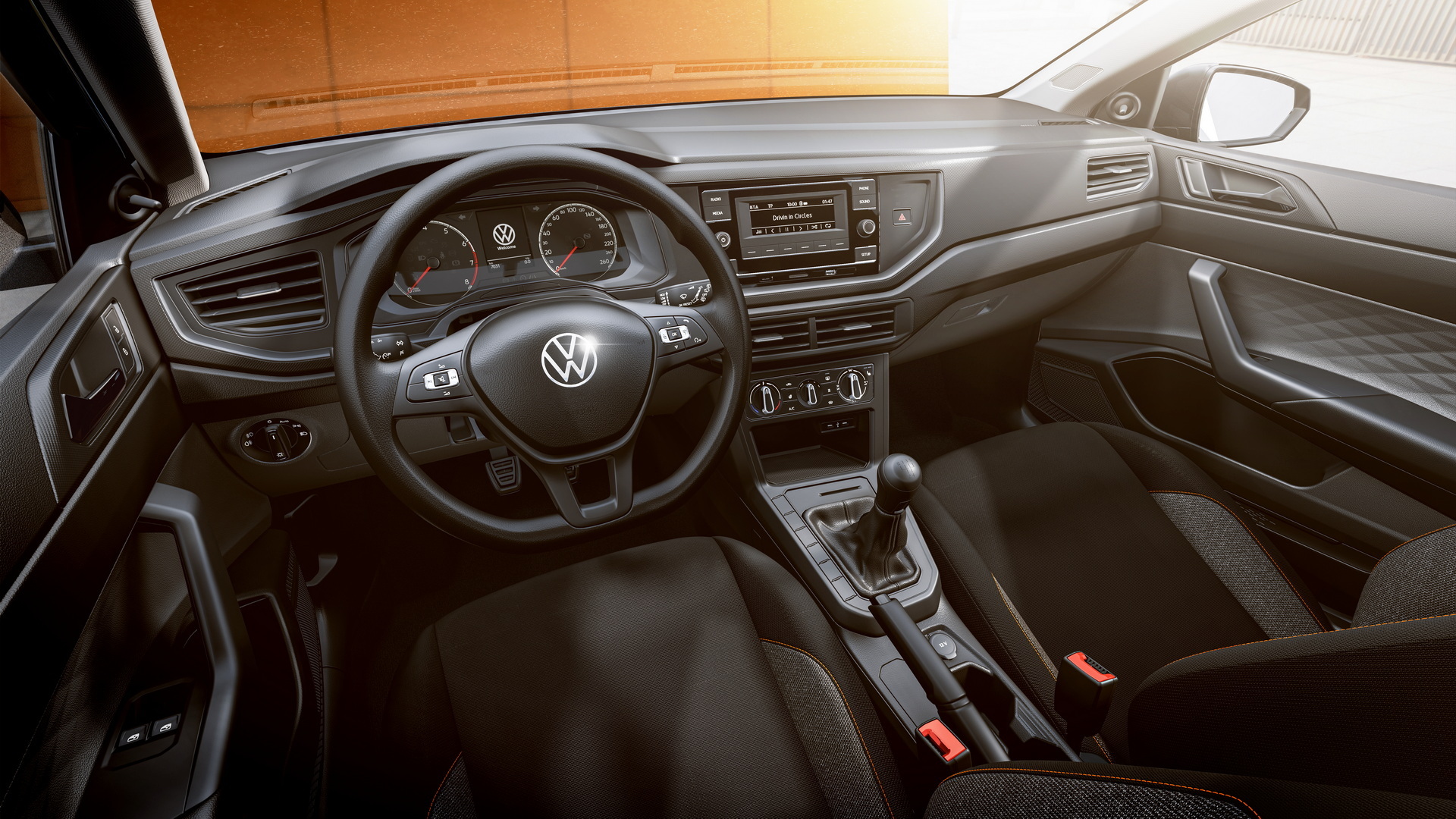 Inside things look more basic, due to the cheaper radio unit that replaces the touchscreen and old-school analog dials on the instrument cluster. Everything is covered in hard plastic with lightly colored textured areas trying to make it more attractive, while the seats are upholstered in fabric. VW prides itself on the “longest wheelbase in the segment” measuring 2.56 mm (100.8 inches) and the 300-litre boot.

Equipment includes air conditioning, electric steering, front electric windows and remote door locks. The launch model will also get an audio system, Bluetooth connectivity, a multifunction steering wheel with integrated buttons, a few USB ports and a roof-mounted antenna. Don’t expect ADAS features in such a budget proposition, with safety features limited to hill-start assist, ESC, seatbelt alert, plus Isofix and to the upper attachment points for child seats. At least the automaker saw fit to equip the Polo Track with four airbags. 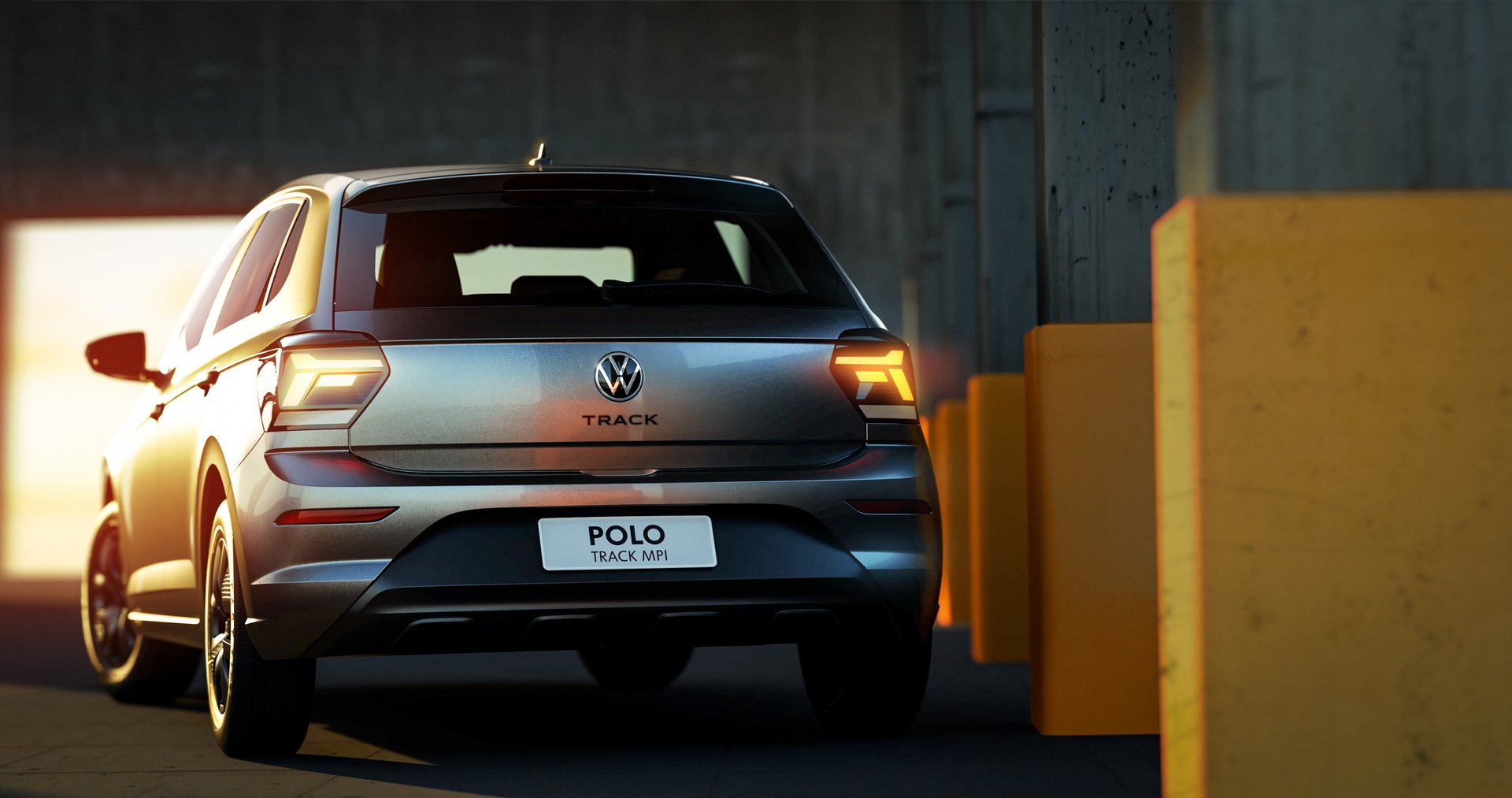 The MQB-based model features the flexible 1.0 MPI naturally aspirated engine, producing 83 PS (62 kW / 84 hp) and 101 Nm (74.5 lb-ft) of torque, similar to the entry-level engine available in Europe. but with the ability to run on both gasoline and ethanol. Power is transmitted to the front wheels via a five-speed manual transmission. This is the only available configuration of the Polo Track, so those wanting a more powerful turbocharged engine and the option of a DSG automatic should look to the regular Polo.

The Polo Track will be produced at the Volkswagen plant in Taubate, Brazil, after upgrading the production line allowing it to manufacture MQB-based vehicles. Note that the South American standard Polo is produced at a different factory in Sao Bernardo do Campo, Brazil.

Along with the reveal of the new Polo Track, VW also announced the swansong of the outgoing Gol. The Gol Last Edition has a limited production run of 1,000 numbered units with many standard kits and inside-out visual tweaks to mark the special occasion.

The VW Gol remained in production for 42 years in various forms, spending 27 years as the best-selling vehicle in Brazil. The current third-generation Gol based on the VW Group A0 platform was introduced in 2008 and received consecutive facelifts in 2012, 2016 and 2018, which keeps it relevant.